"In the sight of angels I will sing your praises, Lord" (Psalm 138) 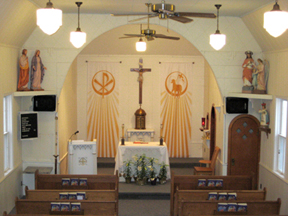 Guardian Angels Catholic Church in Mead, Colorado was founded in 1911, five years after the town of Mead was established. In 1910, Mead claimed 114 residents, including twenty-five Catholic families living in and around the town, who bought the old Mt. Zion United Brethren Church located at Highway 66 and Weld County Road 7. They hauled this church a mile up county road 7 to its present crossroads location, refitted and rechristened it as Guardian Angels Catholic Church, and celebrated their first mass there on January 1, 1911. At that time, Guardian Angels was a mission of St. John the Baptist Catholic Church in Longmont. The first pastor
was Father Bernard Hamburger, who traveled from Longmont to Mead on alternate Sundays.

Vigorous growth characterized Mead and the church during the first two decades of the twentieth century. Standing-room-only masses led the parish to construct an addition to the rear of Guardian Angels in 1929, doubling its size. The architecture is an example of carpenter Gothic, common in the late 1800’s.

Guardian Angels was tended to by the Longmont Benedictines until 1945, when it became a mission of St. Theresa’s Catholic Church in Frederick. In 1964, the congregation built a parish hall next to the church. The church hall is used for religious education classes and parish functions.

Check back soon for a Historical documented history of our parish.